I’ve been really excited to finally review these trainers. I had an idea of what I wanted to write after a few runs but I felt that it was important for me to put at least 100 miles in to them before I released my judgement. The miles have been run, and now I can tell you what I like and dislike about the Nike Air Zoom Elite 9’s.

In my opinion these trainers are a great training shoe for faster runs, and longer races. I might even wear them for my next Marathon. Find out why in the following review.

Let’s start with the easy bit. How do they look? Well true to many of Nike’s releases they look awesome. I have the black and white version, and straight from the box you can’t help but be impressed. The front of the trainer is black, and the black fades to white using discrete grey streaks, in a design which instantly makes you think fast. A couple of bold Nike ticks situated either side of the trainer completes what is a very stylish finish. However, it is easy to be drawn in by good looking trainers. What really matters is how they perform.

The appearance of a shoe is really a personal preference but I would give their appearance a 10/10.

As soon as you slip your foot in to the Zoom Elite’s you want to start running. They fit tightly to the foot. I’m not going to say like a glove or a sock even, but not far from it. The flymesh upper is thin and light and when you tighten the laces, the flywire technology (lace loops to you and me) pull the shoe around your foot and lock your midsole in place. If you take a few steps in them you notice how light the trainer is. These are clearly designed to go fast. The tongue is very thin, in a clear attempt to keep the weight of the shoe down.

However, on a number of occasions when I had laced up the shoe I felt some discomfort in the tongue area. It was nothing major. It just feels like the laces are digging in to the top of your foot a bit. I did resolve the problem by adjusting the tongue and lacing up the shoe a little less tight than I am used to. Despite being quite a narrow shoe, I felt like there was enough room in the toe box, unlike some other narrower shoes I have tried. There is also a heel counter which provides a bit of extra support for your heel, this is topped with a soft ankle collar. Once I got out running in them they felt very comfortable.

Overall I love the snug fit and they almost feel like an extension of your foot when you are running so they get a score of 9/10.

I initially went out and started jogging in these trainers. They felt good. I loved how light they felt, and they were comfortable to run in. They are a neutral trainer which is perfect for my running gait but don’t expect any support if you over-pronate. I used the trainers for every type of session. I clocked up easy miles, intervals, and long runs in them. They held up well at all paces. Where I fell in love with these trainers though, was during a tempo run.

I enjoyed running in them at an easy pace but when you finally let rip they come in to a world of their own. When you run faster and your forefoot pushes off the road, you really feel the spring. I’ve never felt such a great response from every stride in any of my previous trainers. This spring is down to the air unit in the forefoot, and you feel it most when you are running hard. It allows you to transition smoothly between each stride. The forefoot cushioning feels like your forefoot is slightly protected in a way you don’t get with most racing flats. As a result I think these trainers make a great racing trainer for longer distances.

Nike describes these trainers as:

I think they are pretty close to the mark. That ‘snappy’ sensation can really be felt on faster paced runs. The trainers have a 8mm heel to toe drop. This low drop basically encourages you to run with a midfoot to forefoot strike.

Another thing I love about these, is the traction on the bottom. The majority of the outsole is made from a pattern of small blown-rubber pentagons. These feel great on the road and you can feel the extra traction when you take corners, and cruise through puddles. Your feet will get wet though. The flymesh upper is thin and leaky ( or breathable if you like), so these are not the greatest trainers for grass or trail. So stick to the roads. The midsole of this trainer is made from Nike’s cushlon; a blend of phylon and rubber. It seems to work well, and I haven’t noticed any durability issues in either the midsole or outsole as of yet.

I have mentioned how light these trainers feel. Well my men’s UK size 10 (US 11 / EUR 45) trainers weighed in at 252g (8.9 oz). Which is marginally heavier than the Saucony Kinvara 7 (240g), but considerably lighter than the Nike Air Zoom Pegasus 33. It puts them at a weight between most racing flats and daily mileage trainers. I like this, because I find most racing flats don’t offer me enough shoe for the full 26.2 miles. 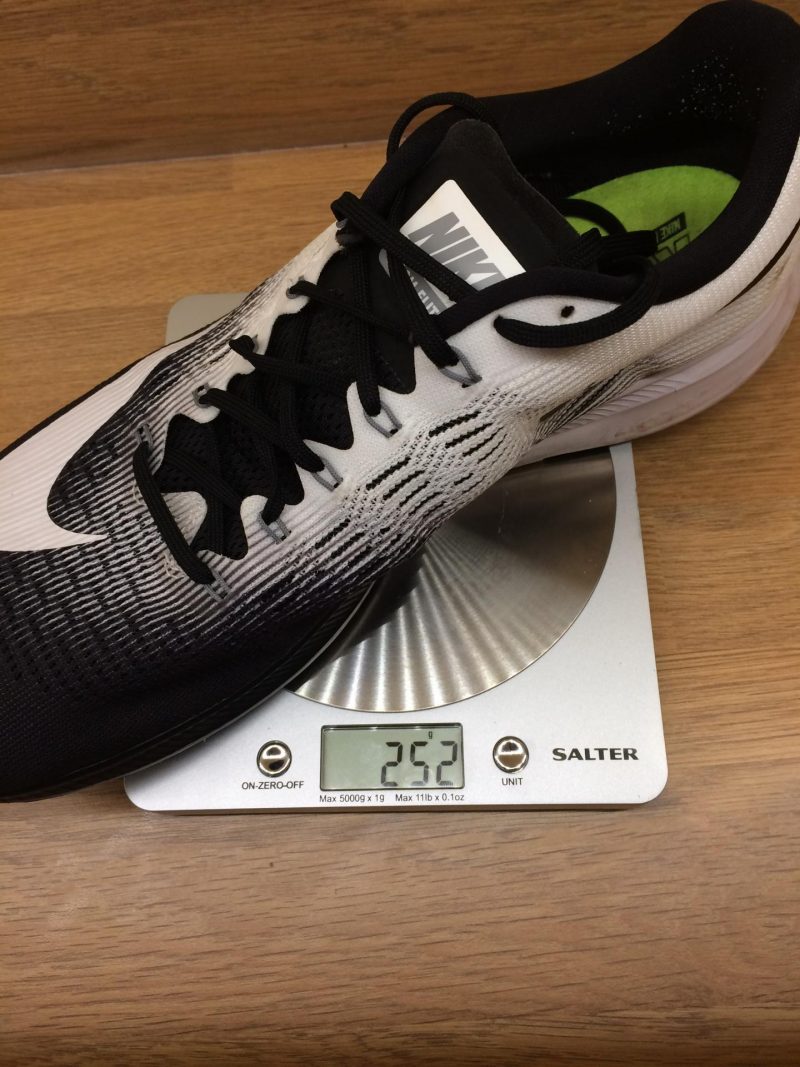 Despite these trainers being comfortable enough to wear on long runs. My biggest problem with them was that I didn’t want to run easy in them. They almost entice you to run fast, which isn’t the best idea on easy days. For me I would wear these for tempo runs, intervals or track sessions, faster paced long runs and races. I think they are the perfect trainer to run a fast half marathon and I would potentially run a Marathon in these too. They have enough shoe to them to protect your feet, and  they encourage you to run fast with their lightweight design, springy forefoot, and 8mm heel-toe drop. So for their performance I would give them another 9/10.

In total that gives them a huge score of 28/30. A versatile trainer that can be used for any distance but really excels going at faster paces. A tempo run dream.

Originally published on The Welsh Runner